IIT Ropar is inviting applications for admission to the PhD course. The last date for applying to the course is October 26. The application fee can be filled online from the official website of the institute with the application fee of INR 200.

Indian Institute of Technology (IIT), Ropar is one of the eight IITs set up by the Ministry of Human Resource Development (MHRD) in the year 2008. The institute is affiliated to University Grants Commission and the All India Council for Technical Education (AICTE), New Delhi. IIT Ropar offers degree and diploma courses in the discipline of Thermal Engineering, Electrical Engineering, Civil Engineering, Chemical Engineering, Mechanical Engineering, Computer Science and Engineering and many more.

IIT Ropar has been featured in the QS World University Rankings for the first time in 2018.

IIT Ropar offers UG, PG and Doctoral courses in the field of Engineering and Technology. Tabulated below are the details for the same:

Candidates can apply online by following the steps listed below:

Candidates will be selected on the basis of the marks secured in the following exams:

The seat allotment of IIT, Ropar is done on the basis of provisions set by the Government of India. Tabulated below are details for same:

IIT Ropar provides scholarships to deserving students on the basis of marks secured in JEE, GATE examinations. Tabulated below are the details for same:

IIT Ropar has state-of-the-art infrastructure with well-equipped facilities. The following are the facilities of the institute:

IIT Ropar is inviting applications for admission to the PhD course. The last date for applying to the course is October 26. The application fee can be filled online from the official website of the institute with the application fee of INR 200. Apply

IIT Ropar established in 2008 under MHRD guidelines is located in Rupnagar district of Punjab. Presently, IIT Ropar offers various Engineering programs in UG, PG and Ph.D. level for admissions. Around 07 disciplines are offered in B.Tech for admission along with B.Tech+M.Tech 5 year integrated program. PG programs like M.Tech are also offered along with Ph.D. (Regular/ Direct/ External and Part-Time).

Admissions are entrance based, entrances like JEE Advanced, GATE, and UGC-NET accepted at IIT Ropar. The applications are available online for both admission and entrance. In certain cases, students are required to apply for counselling separately.

In the year 2018, IIT Ropar was ranked #11 by India Today and #219 by QS Times Higher Education among other Engineering universities in Asia.

Out of 6 branches, Computer Science and Engineering is the only branch that has been on priority and receives maximum preferences during the admission season.

About 90.2% turnover in placements was recorded for the previous year at IIT Ropar, with an average package of 14.56 LPA. Reputed companies like Google, Facebook, Samsung have made numerous recruitments during the on-campus placement drive.

The admissions to UG programs at IIT Ropar are based on entrance and fulfillment of a basic eligibility criteria. Read on for more information:

Around 11 specializations are offered in B.Tech and 12 in the B.Tech+M.Tech dual degree. More details can be found here.

At least one of the conditions must be satisfied for B.Tech admission:

Students must have secured at least 75% aggregate in Class XII (or equivalent) Board examination. (65% for SC, ST and PwD candidates) Physics, Chemistry and Mathematics are compulsory subjects in Board examination.

Students must be within the category-wise top 20 percentile in their respective Class XII (or equivalent) board examination, with Physics, Chemistry and Mathematics as compulsory subjects.

Students must be JEE Advanced qualified for both B.Tech and B.Tech+M.Tech admissions.

The graph below shows that admission to Computer Science & Engineering is slightly tougher with a minimum cut-off of 1082. In comparison to the other specializations where admissions are possible with a cut-off of 4700 and above for general category students only.

Note: Female candidates from any category are eligible for 10 Percentile relaxation.

To know more about cut offs for any other course or specialization, refer to IIT Ropar Cut Off.

How to Apply for B.Tech & B.Tech+M.Tech Admission?

Students are required to submit applications online for JEE Advanced for admission to B.Tech and B.Tech+M.Tech.

Admission to B.Tech and B.Tech+M.Tech programs is offered through JoSAA (Joint Seat Allocation Authority). Students who have appeared for JEE Advanced must keep the following points in mind while registering:

For B.Tech registrations at IIT Ropar, the following documents would be required:

The eligibility criteria for admission to M.Tech program varies with its choice of specialization. The requirements for admissions have been tabulated below:

How to Apply for M.Tech at IIT Ropar?

Students are eligible for admissions if they are GATE qualified. The applications are accepted through the official website of GOAPS. Where the applicant must register first to create a new registration using one unique email id.

The following documents must be submitted in PDF format with a maximum size of 5 MB:

Admission to Ph.D. is based on entrance only. Students can also get direct admission if they fulfill certain criteria given below:

Master’s Degree with 6.0 CGPA or 60% in aggregate for General category candidates. The candidates from SC/ST category should have 55% or 5.50 CGPA.

Bachelors or Masters from IITs with a CGPA 8.0 and above on 10 point scale, are exempted from the requirement of GATE / JRF / UGC-NET.

Students are shortlisted on the basis of their performance in the entrance exam and are called for an interview.

How to Apply for Ph.D. Admissions?

Students can follow the below mentioned step(s) for applying online:

The following documents are required to be submitted along with the application in the PDF format not exceeding 5 MB:

IIT, Ropar offers Merit-cum-Means scholarship to about 25% of the students. The recipients of the scholarship are exempted from paying the tuition fee and get a scholarship of INR 1000 per month.

Note: Besides these scholarships, the institute also offers merit prizes and certificates to the top 7% of the students of each 4-year B. Tech program for the 1st and 2nd Semester. The value of the merit prize is INR 2500.

IIT-JAM Cut Off Round 1

IIT Ropar inaugurated its 2020-21 placement drive on December 1, 2020, and within a week, the institute managed to place 100 of its students under different sectors of the industry.

IIT Ropar has successfully concluded the BTech placements for the 2019-2020 graduating batch, of late. The highest package has been reported as 17.45 LPA whereas the average package pegged at 14.56 LPA. Students bagged some of the plum jobs at globally renowned organizations namely Google, Amazon, Microsoft, Deloitte, Samsung Engineering, Texas Instruments, and Ericsson.

IIT Ropar also received around 10 PPOs this year, thus offering placements to 82% of the students. The placements of this year saw a clean 10% increment in the average package since the previous season. The Computer Science and Engineering branch has received the maximum (91%) placement offers compared to other branches.

Some of the top sectors of this season are IT, Consulting, and Core engineering services. Additionally, PSUs largely contributed to the recruitment of IIT Ropar’s students which includes ISRO, DRDO, Indian Navy, Hindustan Petroleum, Indian Oil, Coal India, ONGC, etc.

Tabulated below are the salary statistics of the 2019 placement season: As in the above chart, there is a lesser difference in the highest and average CTC offered to IIT Ropar students. This depicts a better performance of the entire batch of 2019, on average.

Tabulated below are the placement offers and the placements % as observed in every branch of engineering studies at IIT Ropar in 2019: The above chart illustrates the maximum placement offers received by the students of the CSE branch. The Training and Placement Cell of IIT Ropar offers obligatory internship offers to BTech and MTech students in the pre-final years. These internships usually last for 2-3 months. The internships are offered by both reputed national and international recruiters. Some of the top recruiters of 2019 Summer placement has been:

The figures below illustrate a gradual increment in the placement rate since 2015. However, the 2018 placements witnessed a sudden spike in placement followed by a sudden dip in 2019. 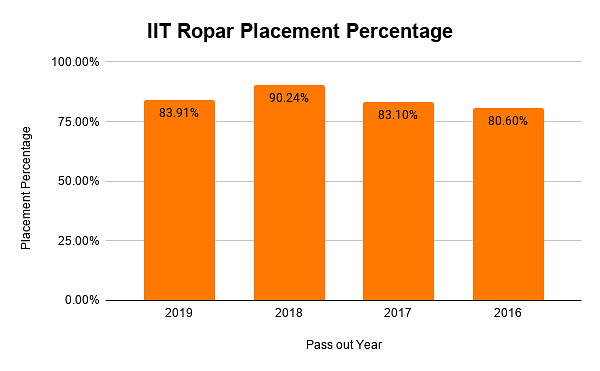 The figures above state that the CSE stream has always received higher placement rates compared to other streams. However, the difference in placement rates across all streams is meager which corroborates of liberal and progressive pedagogy followed in the educational ecosystem of IIT Ropar.

YOU CAN ALSO CHECK

There are no reviews yet.

Be the first to review “Indian Institute of Technology, Ropar” Cancel reply

COLLEGE
TOP UNIVERSITY
Write to Us At
[email protected]